Cityplay, a sports tracker developed in collaboration with PlayMaker, provides AI-based scoring of soccer skills (such as first touch and dribbling) and physical skills (such as speed and agility) to evaluate the wearer’s performance in all aspects of playing football and provide technical guidance.

The use of Cityplay is also very simple, just combine the smart sensor and the belt, attach it to the shoe, and start moving. The sensor will automatically collect your motion data. 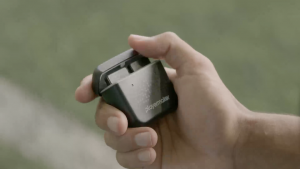 After the exercise, the sensor is removed and placed back in the dedicated sensor compartment, and the data can be synchronized to the application. Once synced, you can view and share your motion data.

When you accumulate enough sports data, a “player card” will be generated to visually display your technical data. 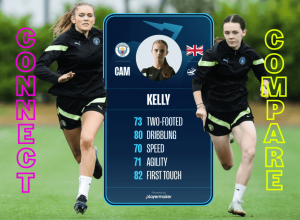 For the sensor that players are worried about affecting athletes’ movements, the official parameters and instructions are also reassuring enough: the sensor is about 3.2 cm long, weighs only 6 grams, and the waterproof silicone belt of two sizes can be used in various environments, and the maximum battery life of 10 hours also allows you to focus more on sports and competitions without frequent changes and charges. 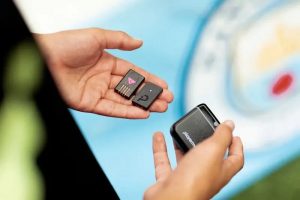 Designed for athletes over the age of 8, Cityplay provides indoor and outdoor technical and physical metrics that are more detailed than other GPS products than traditional GPS trackers. 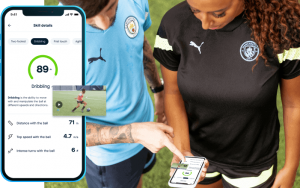 In addition, it is geared towards football players and is able to provide specific indicators related to football and be linked to interactions and movements in the context of the game.

Cityplay tracker adopts the popular hardware + subscription charging model, the lowest half year fee is $149, about $189 a year, and two years is $239. It costs $9.9 per month thereafter.

It should be noted that Cityplay is available in limited quantities. The official explanation reads: ‘Cityplay date generated by the  first users of the app will allow us to understand your training habits and provide a customized experience over time through additional feature releases’ We value our users, so we’ve limited the first number of releases we will release so that we can bring you the best possible experience.” The implication is that Cityplay is still in the data collection and model training stage, and may be open to a wider group of people after the model, algorithm, etc. are more mature.

Wearable technology is one of the fastest growing areas in the tech industry. According to a recent report, the global wearable technology market is expected to reach $415.12 billion by 2029, growing at a CAGR of 17.1% during the forecast period. Wearable products for specific groups of people have also been competing for many years in recent years, especially Huawei’s S-TAG released in July this year has also made more domestic users pay attention to such products.

These are just the tip of the iceberg in the evolution of wearable products, and professional wearable devices that are more focused on a certain use case will appear more frequently in the public eye and shine in the future.

AI intelligent assistants will be the next traffic highland for brands Qualcomm announced the launch of its “most advanced” audio platform...
Scroll to top