Amazon’s Alexa glasses Echo Frames will soon graduate from the retailer’s technology preview and will be available in the general market. At the same time, the company also provides a series of new updates for those who desire to wear the assistant on their faces. Amazon said that the Amazon Day 1 version of the Echo Loop—actually a ring that interacts with Alexa—has been discontinued. 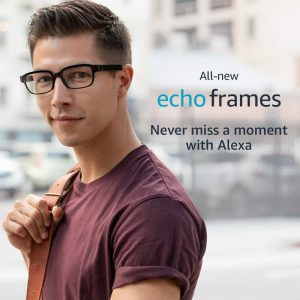 Echo Frames envisions a more direct, sound-first smart glasses. This kind of connected glasses relies on a microphone and speaker to operate. The built-in Alexa can hear the wearer’s requests and questions and then respond with voice. In short, this is a personal smart speaker for the wearer’s face.

It is reported that the Day 1 version launched by Amazon is actually a test bed for testing new ideas and concepts. Previous sales only accepted invitations-Amazon has not disclosed the specific number sold-focusing on obtaining feedback to determine whether expanding the sales range is a good idea.

Now, Echo Frames is graduating from this project and has been upgraded in the process. It is reported that it is priced at US$249.99. For those who have already purchased the Day 1 version, it is only US$70. Consumers will have three color options: Modern Tortoise, Horizon Blue and Classic Black. They are made of glasses grade TR-90, carbon fiber, and titanium, and they are also splash resistant. 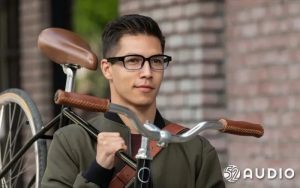 As before, they can be connected wirelessly to the wearer’s smartphone. However, the battery life of the new product is longer: Amazon said that in the case of continuous playback, the Echo’s battery life is 40% longer than the original model. At the same time, they can be turned off automatically after turning them upside down for three seconds.

In addition, its sound quality has also improved, and Amazon promises to provide richer and fuller sound in music and Alexa’s response. The volume can also be adjusted automatically according to the noise level of the surrounding environment. In addition to the official voice assistant, the wearer can also use them to interact with Siri and Google Assistant, and now it also supports calendar and group messaging functions. The VIP filter allows only pre-approved contacts.

In order to protect privacy, the microphone is designed only for the wearer. Double-click the operation button to completely turn off the microphone, and at the same time you can see a red light, which means that Alexa is not listening.

Although Amazon has introduced non-corrective clear lenses with Echo Frames, they are still compatible with “most” prescription lenses. Amazon said that the new Echo Frames have accepted pre-orders today and will start shipping on December 10.