Approximately 80% of TWS headset shipments in India are local brands, up 143% year-over-year in 3Q2022

The biggest contributors to shipments came from local brands, accounting for about 80% of shipments, including boAt, Noise, Mivi, Boult Audio, Ptron, Mobatree, 5 Elements, Duffer, and Chinese brand One Plus, which returned to the top five of TWS headphones in India with two new products, Nord Buds and Nord Buds CE, in fourth place. 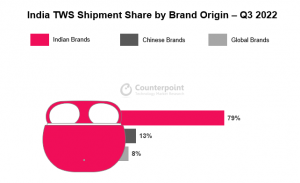 Apple, Samsung and other global brands accounted for about 8% of shipments, achieving 91% YoY growth and 9% YoY growth in the third quarter.

The five largest brands of TWS headset shipments, accounting for almost 70% of the overall market shipments.

boAt accounted for seven of the top 10 best-selling models. The Airdopes 131 topped the list for the sixth consecutive quarter with a 9% share 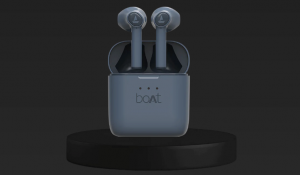 OnePlus holds the other two, the recently launched Nord Buds and Nord Buds CE, each with a 2% market share. 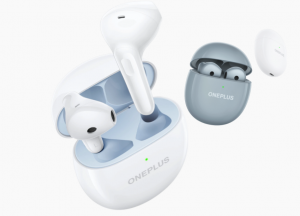 Noise took the last spot with its best-performing headset, the VS102, which had a 3 percent market share in the third quarter of 2022. 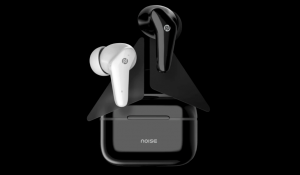 In terms of distribution channels, Liz Lee, associate research director, said 79 percent of the share is still coming from online sales. The TWS online business on Flipkart (India’s largest e-commerce retailer) accounts for more than half of online sales. This means that strengthening the offline channel is challenging.

Mivi and Boult Audio have recently entered the offline space and plan to expand aggressively offline. Truke, an online-centric brand, also plans to enter the offline market in the next quarter. Brands in both the online and offline markets are exploring and partnering with large retail chains to increase their offline presence.