In 2020, the Bluetooth 5.2 specification was announced to support the new LE audio specification, and with at least two of these Apple employees listed as participants in LE audio development, it is likely that Apple will adopt the specification for use in future devices. According to a newly published document in the Bluetooth SIG database, Apple recently tested an unknown component with Bluetooth 5.3 support. The document does not reveal any other noteworthy details, but along with a similar document from last month, it suggests that Apple is preparing a version of Bluetooth with LE audio support for future devices.

LE audio would be particularly beneficial for AirPods, such as the rumoured second-generation AirPods Pro due later this year. below, we outline five benefits of LE audio for future AirPods Pro, assuming that source devices such as iPhones, iPads and Macs will also be upgraded to support the specification in the future.

Multiple audio stream support. LE Audio will enable multiple simultaneous audio streams between a source device such as an iPhone or Mac and the AirPods Pro. This will allow a single left or right AirPod to have its own Bluetooth audio connection with a device that supports LE audio for improved reliability.

In July this year, the Bluetooth Technology Alliance said it expected LE audio-enabled products to be available by the end of 2022. 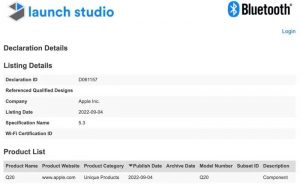