Overall shipments were 28.57 million units, down 23.3% year-on-year. This follows a 7.5% year-on-year decline in the first quarter, and is another downward trend.

In terms of category breakdown, 16.18 million units of ear wear devices were shipped, down 23.2% year-on-year.

Of these, true wireless Bluetooth headphones, which play a major role, shipped 12.73 million units, down 22.1% year-on-year. The segment, which has been stimulated by updates to active noise cancellation features and falling prices, showed a distinct lack of drive, with most of the top brands seeing a decline in sales.

Under the declining trend, some local brands and white labels continued to update and improve, still evolving towards intelligence.

Shipments of wristband devices were 8.46 million units, down 12.3% year-on-year.

Although the mid-year 618 event and some manufacturers’ new product launches had a stimulating effect on sales, the overall market environment and product feature iterations weakened the stimulus to purchase demand.

In addition, sales of bracelets declined most significantly this quarter, with shipments of only 3.83 million units, down 40.2% year-on-year. 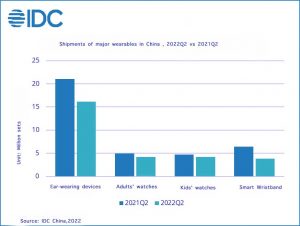 As bracelets evolve more and more in the direction of large screens and watches, the category is gradually showing its weakness in the competition with smart watches. 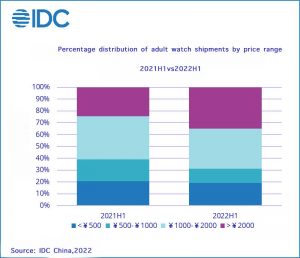 According to IDC, manufacturers will gradually focus on the high-end market in terms of product placement as they place more emphasis on revenue and profits than on shipment size during the market downturn.

On the consumer side, the overall willingness of high-income groups to spend was less impacted by the challenging economic environment.

In particular, the willingness and ability to consume smartwatches, which are relatively weak in terms of immediate demand, remains stable, and they are even more actively involved in daily exercise in order to improve their lifestyles in the direction of health, thus stimulating more consumer demand.

Based on the performance of annual watch shipments in the first half of this year, the current economic environment and other factors, IDC forecasts that adult watch shipments in China will decline by 3% in 2022, while the sales scale will be able to reach a growth rate of 8%. 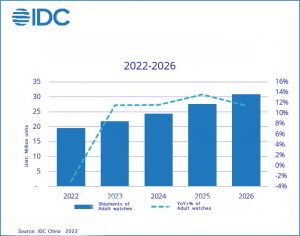