With the launch of Apple’s high-end iPhone 14 Pro models, each of which gets an A16 processor as well as an improved rear camera, the fringes that have been used for years have finally got a major change to a pill-shaped black area called Dynamic Island, but there’s something big going on here. The new iPhone 14 Pro was the centrepiece of Apple’s ‘Far out’ event on 7 September, the biggest difference between the two high-end models since the iPhone 13 series in 2021. As expected, only the Pro model gets the new A16 Bionic processor 4nm process, with nearly 16 billion transistors, and the new chip brings performance gains in three important areas, power efficiency, display and camera. The iPhone 14 Pro and iPhone 14 Pro Max also have the most obvious differences compared to the 2021 models, as well as to the new iPhone 14, where the bangs have disappeared and have been replaced by a pill-shaped area, also known as the “Dynamic Island “This is used to display various notification animations, and its black area is expanded to show reminders and background activity in a variety of clear and coherent forms. From the demo, it appears that Apple is trying to eliminate the impact of the pill opening on the experience, and that the Dynamic Island will also adjust in a fun way when there are multiple background active processes. The rear main camera on iPhone 14 Pro has been upgraded to 48MP, f/1.78, 24m focal length and the sensor supports quad-pixel aggregation. The quad-pixel sensor is capable of providing different sensor modes for different photos. Most of the time, it does a 12-megapixel binning of the photo to capture maximum light. The new ultra-wide angle camera has 1.4 micron pixels. There is a 3x improvement in low light, better macro results and the “photon engine” brings significant improvements in low light conditions.

Pixel binning allows the sensor to be cropped in different ways, offering a true 2x zoom at a 48m focal length, the iPhone 14 Pro can shoot ProRAW at 48MP resolution, the new sensor has different pixel modes and new machine learning algorithms can be used to optimise it.

The Pro model will also be supported by emergency satellite help.

In terms of video, Movie mode now supports 4K @ 24 / 30 fps, and the newly introduced Action mode is for “professional filmmakers”. If Action mode is as good as Apple says it is, then it will be the most meaningful upgrade for many creators and filmmakers on these phones. 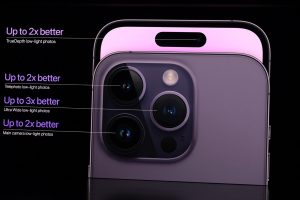 The iPhone 14 Pro / Pro Max models will be available on 16 September. 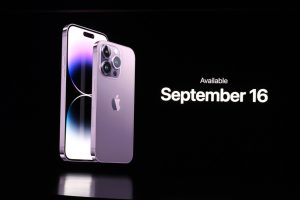